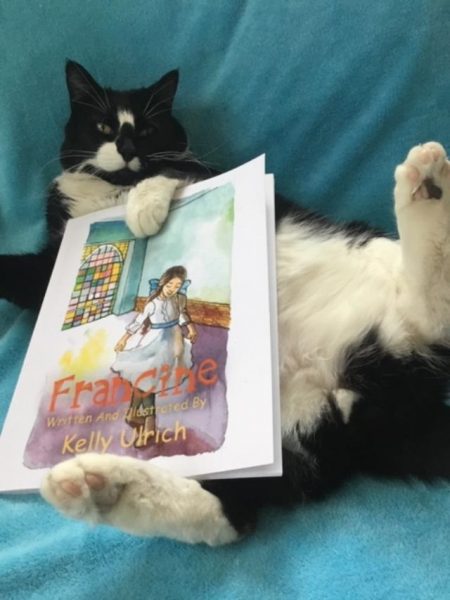 I love ghost stories, especially because humans freak out when they see a ghost.  Loads of fun to see them run in the opposite direction!  Imagine my delight when I stumbled on this story of a girl ghost name Francine who lives in an rickety old house with no one to play with or talk to. This makes me sad because cats love to play.  But all this is due to change when a moving van arrives one day with a family and a baby, named Jenny.  Francine is delighted…because now she might have to someone to talk with.  She finds herself comforting the crying baby, and turns out to be an awesome babysitter,  giving her gifts, such as an old rocking horse.

As Jenny grows older, the two of them become good friends, sharing secrets and playing together.  One day, Francine says to Jenny, “Can you keep a secret?  Jenny assures her ghosty friend that she can, and Francine leads her down the basement stairs, showing her a door under the stairs.  She opens the door, and leads Jenny to the very back of the room. Francine pulls  aside some ratty wallpaper and two of them crawl through a small opening into a small room.  Jenny looks in amazement as the toys in there….because all of them are from a 100 years ago. Jenny sees worn out storybooks, old ratty dolls, and pretty clothes from yesteryear.  (Cats would be in seventh heaven in this kind of room….so many toys to play with!)  Francine and Jenny spend many hours playing in their secret hiding place.

But girls have a way of growing up, and one day Francine sees, a “For Sale” sign in the front yard, as Jenny and her family move out of the home.  Years pass.  The roof begins to leak, the grass grows long and tangled, and rotting fruit falls to the ground. And then one day, Francine peeks out the window and to her great surprise, she sees a car drive up and a young woman with a baby boy in her arms.  And guess who it is?  Jenny has grown up and is now a mother herself.

Humans come and go, but ghosts (and  cats) are forever.