“No Kiss for Mother”
book written and illustrated by Tomi Ungerer 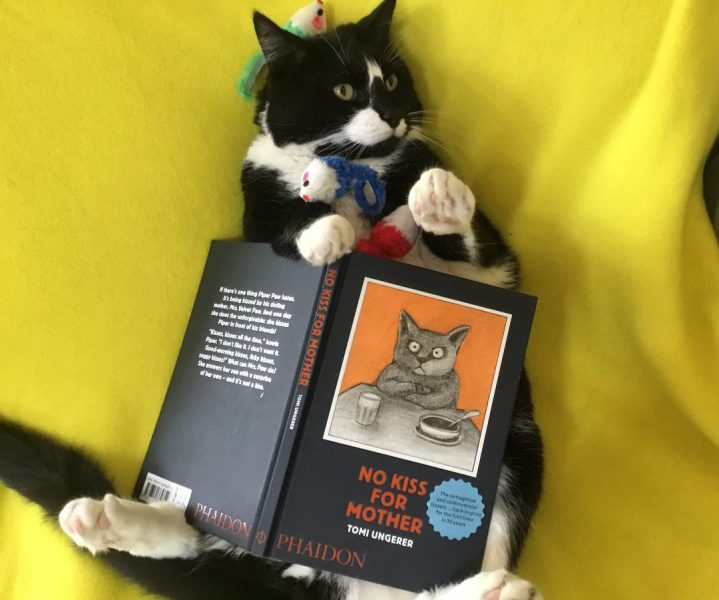 Gawd, I love this cat, Piper Paw.  He is such a trouble-maker.  He throws an alarm clock out  window which smashes the windshield of his dad’s car.  (Pop’s is a supervisor at a rat-processing plant.)  He  refuses to brush his teeth, or wash his face, and reads soggy comics behind a closed and locked bathroom door.  He crumples the clothes that his mother has neatly laid out for him,  because he doesn’t want to look like a “postcard kitty”.  But most of all, he hates being kissed by his mother. It makes him hiss at her.

He is such a vexing, mischievous kitten–which is my kind of cat. And the things he does at school.  He rarely does his homework, but his grades are good. (I sailed through both elementary and high school, by the seat of my furry pants…reading forbidden books about naughty cats, such as,  Lady Fluffy’s Lover.)  Piper Paw loves practical jokes which includes sprinkling catnip on all the other kitty students,  stuffing the teacher’s handbag with live spiders, and pouring glue down the girl kitties’ necks.  And don’t even get me going on what is in his locker:  fireworks, smoke bombs, and bobby traps; great tools to cause havoc in the class room.

On this one particular day Piper Paw gets into a huge fight with Jefferson Bully.  They bite and claw at each other, rolling around in the mud.  By the end of the fight half Piper Paw’s ear is gone and both are marched off to the school nurse.  The iodine and the stitching back of the ear cause yowls of pain.  To add to Piper’s misery, his mom, Mrs. Velvet Paw, decides to come by the school and take him out to lunch.  When she see him all stitched up she covers him with kisses….making Piper howl, “Kisses, kisses all the time.  I don’t like it.  I don’t want it.”

But his embarrassment doesn’t end there.  The waiting taxi driver scolds Piper Paw for his outburst, and his kind, gentle, sweet mother slaps Piper, something she has never done before.  When mother and kitten reach the restaurant they are both silent.  The mole innards casserole remains untouched. Piper slinks out of the restaurant; returning to school,  and promptly empties his locker of stink bombs, fire works, and an awesome sling shot.  He sells his arsenal to fellow kitty cats.  He takes the money to the local florist buying a bouquet of yellow roses.  And with the promise of no more kisses, he proudly presents the pretty yellow flowers to his mom.