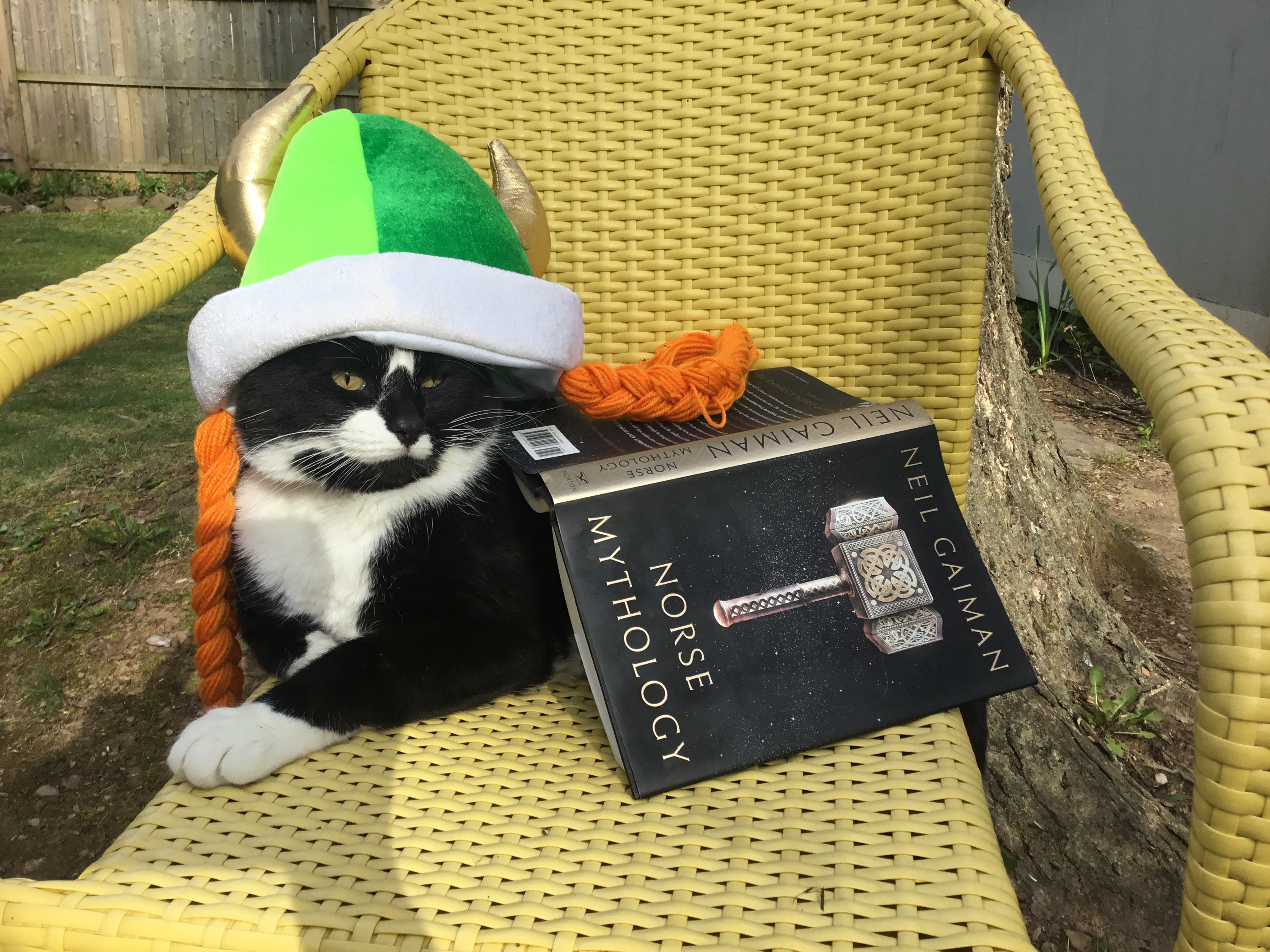 I’ve decided to tackle and review an adult human book, rather than PawReview just human children’s books.  I think it’s very appropriate to review a book on Norse mythology as one of my cousins, the Norwegian Forest cat, is a descendant from a Norse god, named Balder–which is a little known fact.  But more about that later

A long time ago there were 9 worlds populated by gods and goddesses with a few giants thrown in for good measure.  Thor (god of Thunder), Odin (a pretty wise dude), and Loki (a god generally up to no good) played major roles.  The gods were always fighting among themselves (or fighting the giants), pulling tricks on each other and changing themselves into other animals; falcons, fish, wolves. And nothing was as it seemed.  Thor pretty much did as he wanted (a common personality trait in cats).  He had a powerful belt, named Megingjord which doubled his strength, and a hammer named Mjollnir.  Supposedly, this hammer could level mountains and would hit whatever object Thor threw it at, no matter how poor his aim.   I really like Thor, but it sounds like he’s exaggerating about this “magic” hammer.  Oh well, I guess gods can get away with this kind of thing.

Goddesses also populated these worlds.   My favorite, Freya,  loved cats and two of the them pulled her chariot.  I kind of think she was a party girl and had lots of boyfriends at the same time, if you catch my drift, a fact Mr. Gaiman glossed over.

While Mr. Gaiman wrote a very engaging book, I must fault him for one major lapse.He barely mentioned the role of cats in Norse mythology.  Perhaps, he was so busy concentrating on humans that he missed cats’ role.  Perhaps humans left more paper documentation (cats tend to tear up paper and chew it).  Which brings me to the god, Balder.  Balder was handsome, adored by everyone, and loved the sun.  Cats, of course, practically worship the sun.

But he starts to have bad dreams, nightmares about the world ending; of darkness, of being trapped.  And then one day, Balder dies, killed by a mistletoe dart.  (Humans use mistletoe as an excuse to kiss each other.)  Everyone is very sad, because Balder was such a great god.  The animals are sad, even the trees, and the metals weep over his death.     And then things get very grim.  The world starts to fall apart.  Winter never ends.  The sun and rainbows vanish.  Brother fights brother.  There are earthquakes and floods, and an evil wolf with flaming eyes and nostrils.  (I never did like wolves…members of the dog family.)

But, but, the sun comes back; the earth turns green again and Balder comes back from the underworld, alive and smiling in the sunlight.  Because Balder was actually a cat, a Norwegian Forest cat.  And as everyone knows, cats have nine lives. There you have it, Mr. Gaiman.  Balder rises from the dead, using up one of his nine lives,  and helps bring about the new world.

Mr. Gaiman would do well to heed the wise words of Mr. Pratchett that are posted under my photo at the top.   Perhaps future editions of this book will include changes that herald the role of cats in Norse mythology.