“The Tiger, The Braham, and The Jackal, An Indian Folktale”
Retold by M.J. York 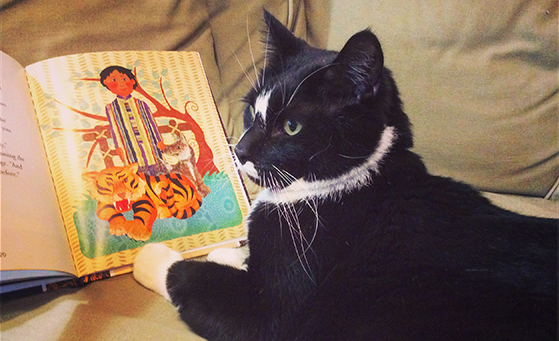 So a caged tiger, (who is one of my cousins), tricks a Braham (that’s an Indian word, for a holy male human) to let him out of the cage, promising not to eat the Braham. Ha, ha, ha! Tiger is released and attempts to eat the Braham for lunch

However, a clever jackal (that’s a member of the dog family), tricks the tiger into getting back in the cage.

I don’t like this fairy tale, because tiger cats are smarter than jackal dogs. The author obviously doesn’t know what he’s talking about.

But at least, you human folks can learn this: Don’t be easily tricked into believing everything you hear.