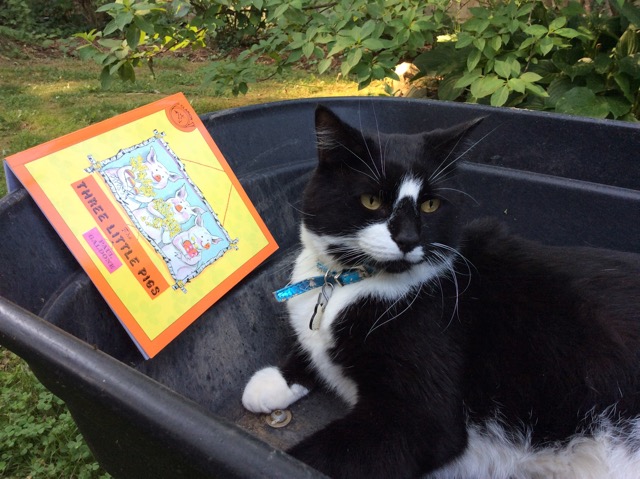 In the same village there lived a big bad wolf, a very bad wolf.  I should mention that the wolf is a member of the dog family…need I say more?  Wolfy loved pork:  pork bacon buddies, pork sandwiches, pork pies, pork ribs, pork and beans, pork chops, pork roast and pig’s ear.

The naughty wolf knocks on the door of the piggy house made of straw.  “Little pig, little pig, let me come in,” he says.  “Not by the hair of my chinny chin chin,” says the pig.  Then I’ll huff and I’ll puff and I’ll blow your house down, ” says the wolf.  So he huffed and he puffed and blew the house away and ate piggy number one.  Exit pig one.  And the same thing happened to piggy two, who lived the house made of sticks.  Exit pig two.

I kind of like this wolf.  He is a guy of his word and when he says he’ll blow these houses away…vamoose he blows them away.  He also doesn’t waste his time chasing snow bunnies in Alaska.

Finally, wolfy came to piggy house number three…the one made with bricks.   The big bad wolf threatened to huff and puff and blow the house down, but nothing happened.  He huffed and puffed, and huffed and puffed and the house didn’t budge.  This made the wolf very angry.  So he shouted that he was going come down the chimney and eat piggy number three up!

The wolf grabbed a ladder and climbed up to the roof of the house.  Piggy number three grabbed a iron pot of water and hung it over a burning fire.  Wolfy fell down chimney into boiling water.  Wolfy burns and piggy lives…happily ever after.