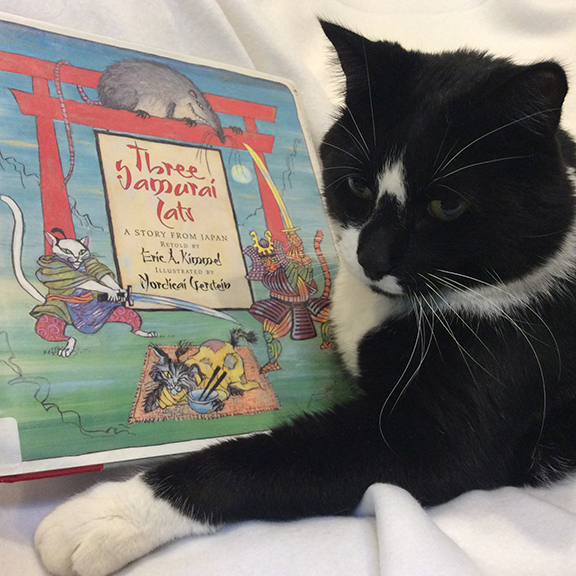 So evil rat resides in the castle of a Lord, causing havoc. Rat laughs at traps, ignores poison, and attacks guard dogs. Lord makes a horse journey to a distant shrine famous for its fighting samurai cats.

First strong young cat brings sword to fight rat: Rat outsmarts cat. Second samurai cat, in a full coat or armor, gets kicked to smithereens by rat. (This would never happen to me, as I’m much smarter!)

Third samurai cat is old, has no teeth, and walks with a limp. Naps all the time, ignoring rat, but assures the Lord he’s on top of things. Rat steals loads of rice to make a big ball. Big rice ball rolls on top of rat, trapping him. Raggedy cat asks rat to leave sticking out a sharp claw to make his point. Rat leaves.

Apparently, there’s some Zen saying about giving a rat enough rice and he’ll bury himself.