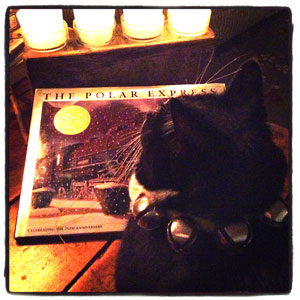 When the roar of a train rouses a young lad from his bed, on Christmas Eve, he hops aboard, and he’s in for the ride of his life. The locomotive travels as fast as bullet; through dark woods, over high peaks, across a barren cap of ice and finally to Santa’s workshop.

There, he sees elves (those are small humans) scurry about. Santa asks the young lad what he wants for Christmas, and he replies that he wants a bell.. But only he can hear the sound of the bell because he believes in magic.

He believes that a man in a bright red suit can fly around the world in a sleigh pulled by hoofed animals with skinny legs, and drop presents down chimneys in the span of single night.

As you can see from the photo, I’m wearing four bells that Santa gave me, because cats believe in loads of magic: We believe our meals will always be on time, and that we will receive lots of catnip for Christmas. And we believe in the biggest magic of all: That humans will never let us down.