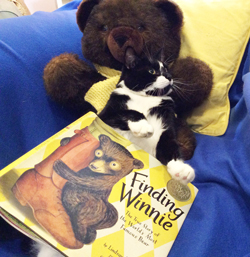 Imagine this…there are other animals that might be more famous than cats. Who knew?

In this book, (that won a fancy pants childrens’ book award in 2016), a young orphaned bear cub ends up at a train station in a northern land called Canada, in the town of Winnipeg. A soldier, who is really a veterinarian, plans to travel to the other side of the ocean to fight in a war where even horses are called to serve.

(I don’t understand why humans do all this travelling. When do they have time for 3 hour naps several times a day?)

The veterinarian, Dr. Harry Colebourn, rescues the bear and names him, “Winnie” in honor of the city Winnipeg. Well, I guess you’ve got to name even a bear.

When the vet has to cross the ocean to a land called England, he can’t ‘bear’ to abandon Winnie…who now sleeps under his bed. So, he takes Winnie with him on the big boat. Note to Winnie: you’re supposed to sleep on top of the bed, next to the warm human—not under the bed on the cold floor.

But bears grow up to be very big, and when the vet has to leave England and travel to France to take care of the war horses, he arranges for Winnie to have a new home: the London Zoo.

A little boy, named Christopher Robin Milne, comes to the zoo with his dad, A. A. Milne, who happens to be a writer. The zoo keepers allow the human boy into Winnie’s cage so he can play with the bear. Can you imagine that happening today?

Go figure. How does a book without a cat sell so many copies?